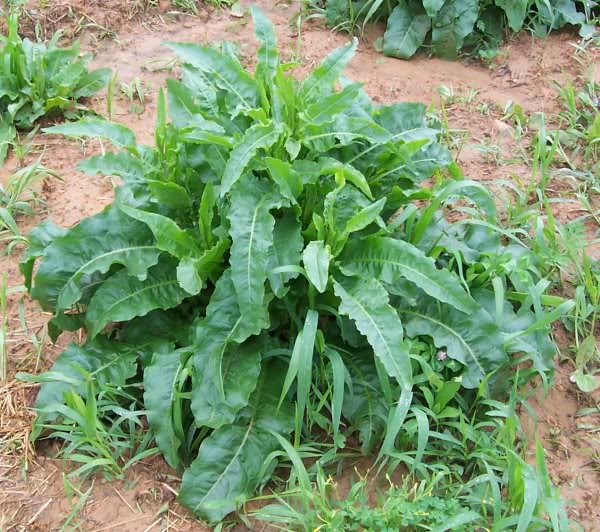 Curly dock is a perennial weed in the buckwheat family. It has a fairly pleasant taste, and the leaves are very rich in vitamin A and C, protein and iron, and can be eaten raw or cooked. The greens are known to have approximately 4 times more vitamin A than carrots. The human body converts carotene into vitamin A, and may increase night vision.  The roasted seed has been used as a coffee substitute.

They are especially common in wet meadows, along ditch banks and in waste areas.  Curly Dock can be identified by its elongated leaves which have wavy margins or edges, thus the name "curly" dock. In summer, the plant has reddish, rigid stems, 2-4 feet tall. Flower stems have greenish flowers.

Curly Dock is one of several variations of Rumex Species. Bitter Dock aka broadleaf Dock looks very similar but although bitter it is equally as edible.  They have a distinct characteristic of a papery sheath (ocrea) connecting the stem and each area of the leaf stem beginning a leaf, it starts out moist when young and becomes papery and less noticeable when dried, sometimes disappearing completely.  They all contain teardrop shaped seeds.

Bitter Dock has a slightly less wavy edge and much wider leaves, with often a red tinge in the leaf stalk and midrib that increases with age.

Both are substantial green.  Curly dock is biennial, meaning they spring up a basal rosette the first year, then a stalk, flowers, and seeds the second year, and that winter it will die.  Broad leaf dock is perennial, meaning that it continues to build a tap root year after year, creates a stalk to flower seasonally, and continues to grow in the same spot indefinitely.

The younger the leaves, the less bitter and less tough they are.  If you find either of these attributes undesirable, you may cook them in a change of water to make them more palatable.  If you find the stalk hard, woody, or tough to chew, then it is past its prime and you may want to seek out younger growth.

Curly Dock root is used to condition the gall bladder and liver.  It is a bitter tonic, astringent, gentle laxative, and alterative. The yellow root helps to increase bile production which is also yellow in color. Increasing bile production helps the body in the detoxification of the entire system, the blood, and is also important for processing, and not storing fat and other wastes. One way to tap into the roots medicinal benefits is to make a simple infused wine.  Take the fresh root and put it inside one of your favorite bottles of wine. Re-cork it and allow it to soak for a few days, at which time it will be ready to use. For a stronger medicine you can use your favorite alcoholic beverage and let it steep for a month.

Special concern should be taken to anyone prone to kidney stones, as excessive amounts of eating plants with oxalic acid in them; spinach, sorrels, curly dock, can increase chance of kidney stones.