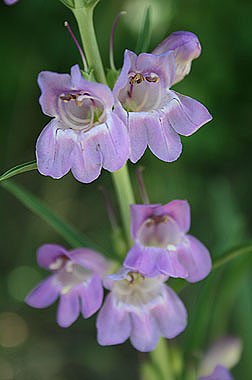 The yucca (also known as Soapweed or Spanish Bayonet) is commonly found on dry hillsides from desert, plains to foothills. They are usually found at lower elevations in dry areas but can be found in mountainous areas just the same and are fairly abundant in the ponderosa pine belt around 7000ft.  From the center of the leaves, a flower stalk emerges in early spring and grows rapidly to about five feet.  There are more than 40 species of the yucca and some look quite different from the species shown here.  The narrow leaf yucca is the most common species found in Colorado.

The leaves are green and very fibrous with a sharp point at the end, which can be used as primitive needle and thread or a fish hook. The leaves can also be used to make very strong primitve cordage, baskets or even sandles.

The roots can be used to make soap.  While many yucca roots are edible, the narrow leaf yucca's roots are not.  However, the base of the plant can be roasted and eaten

The fresh flowers can be eaten raw in salads or roasted and dried for winter. It is best to get them before they fully open. If they are fruit bearing, you can cook the fruit when it reaches its mid-life. You do not want to wait too long as the fruit seeds are poisonous.

The wood from yucca is great for making fires using primitive methods such as a bowdrill or firesaw.